We didn’t go anywhere. N tells me working is more productive when no one is in office. I believe it. What did I do? Some baking. Peppermint sandwich cookies were a hit, but the optimal amount of frosting for looks and for eating are different. The former is about 2x the latter. These are pretty but too sweet. 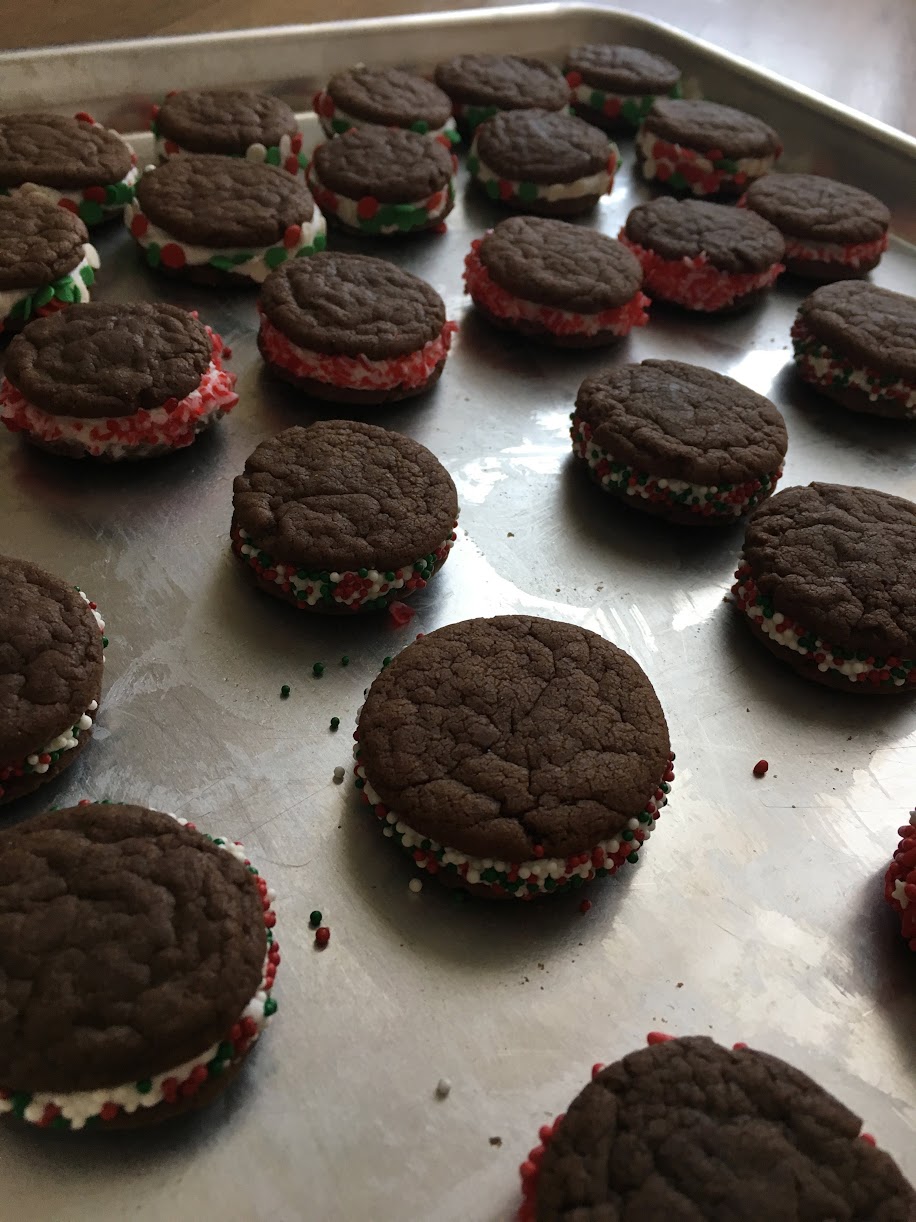 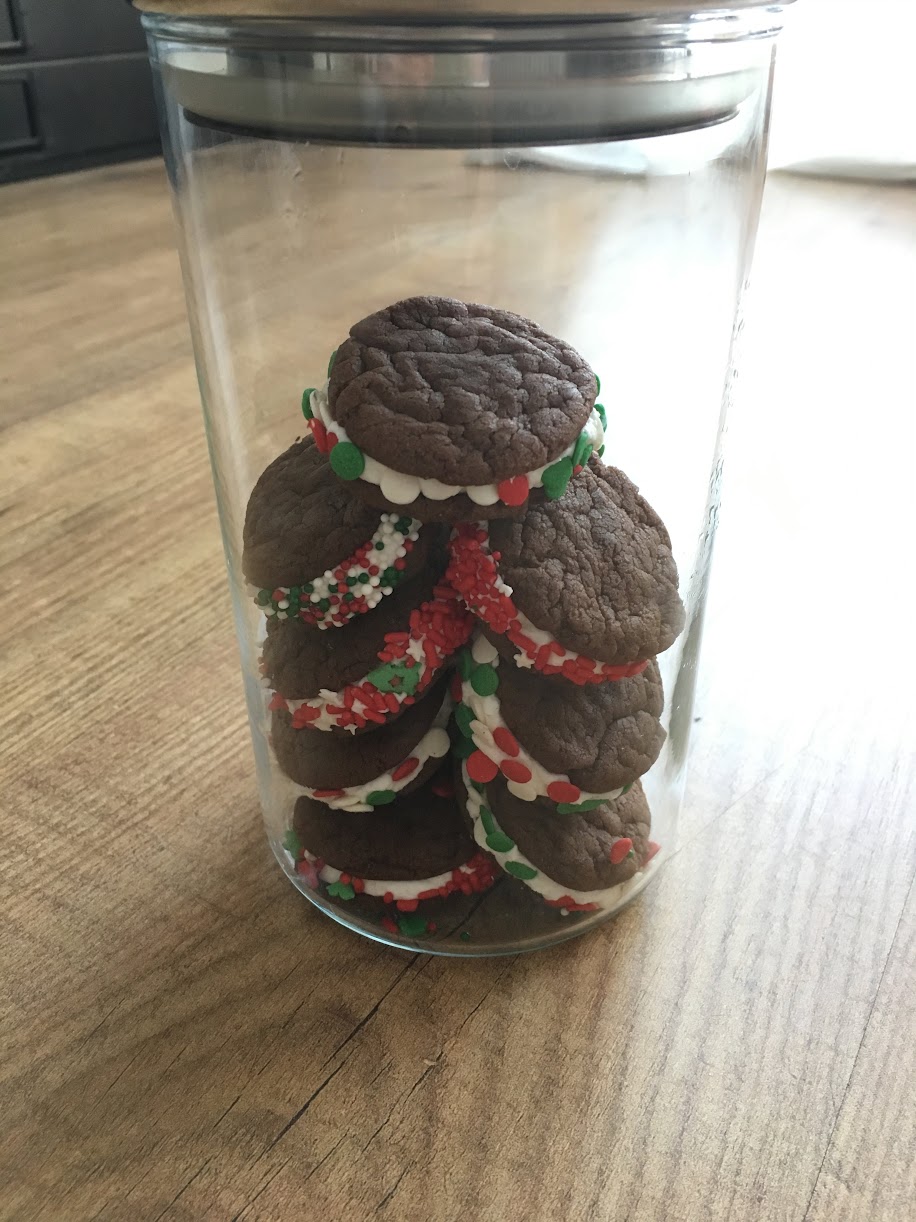 We had some friends over for the traditional French Christmas Eve dinner. You know, 6+ courses, lasts all night, feels like your stomach will rupture at the end? It started with canapés on crap toast, which seems strange, given how snobby the French usually are about bread. I made the NYT lamb tagine, but disliked the sour note from the apricots. 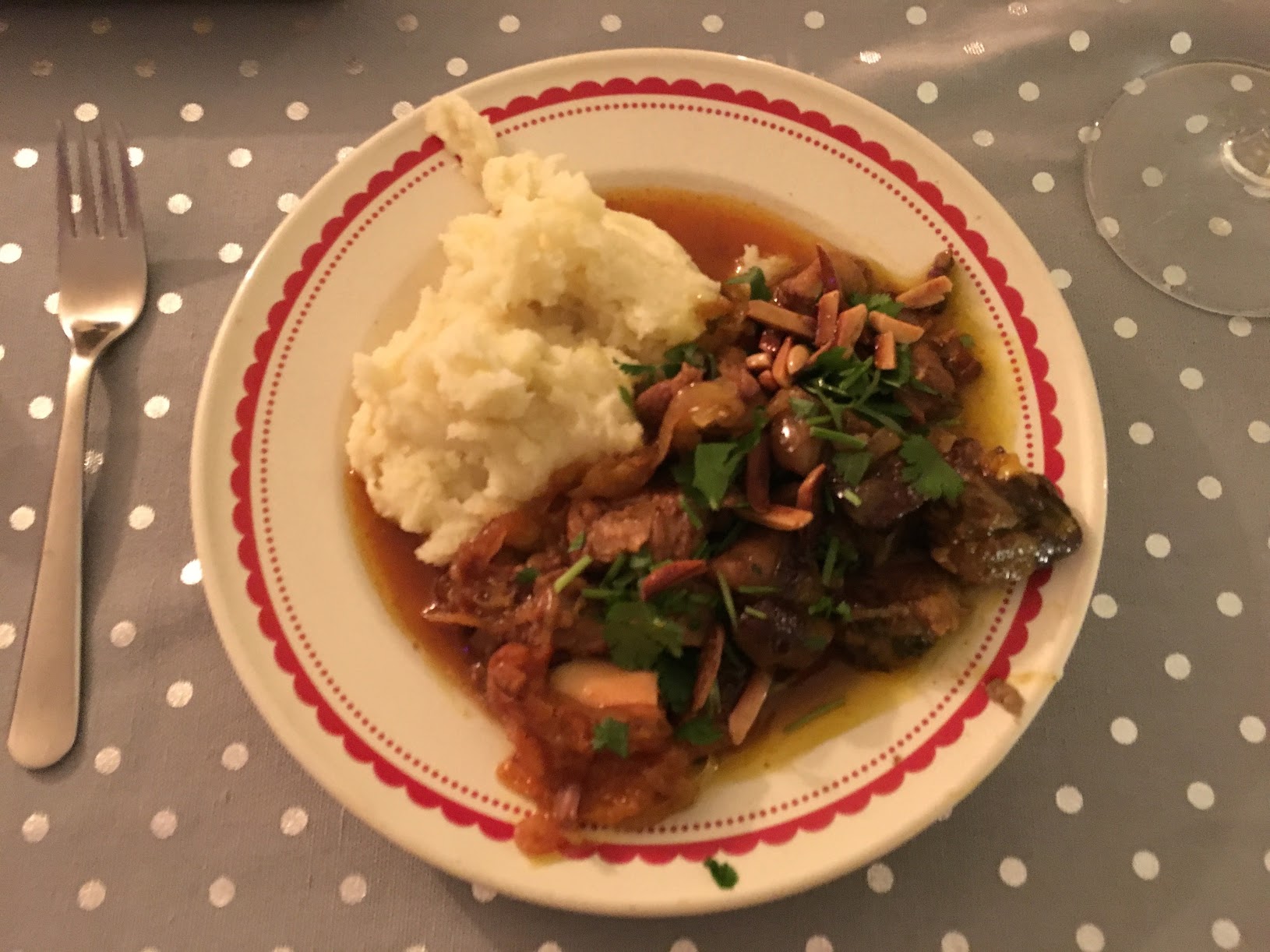 (Do you like the La Boulange plates? Wish I had found some bowls too..)

Here’s our cheese course. One of them is called tarentaise, but I mistakenly called it “tartinaise” at the Cheese Board and asked if it was for slathering on bread. 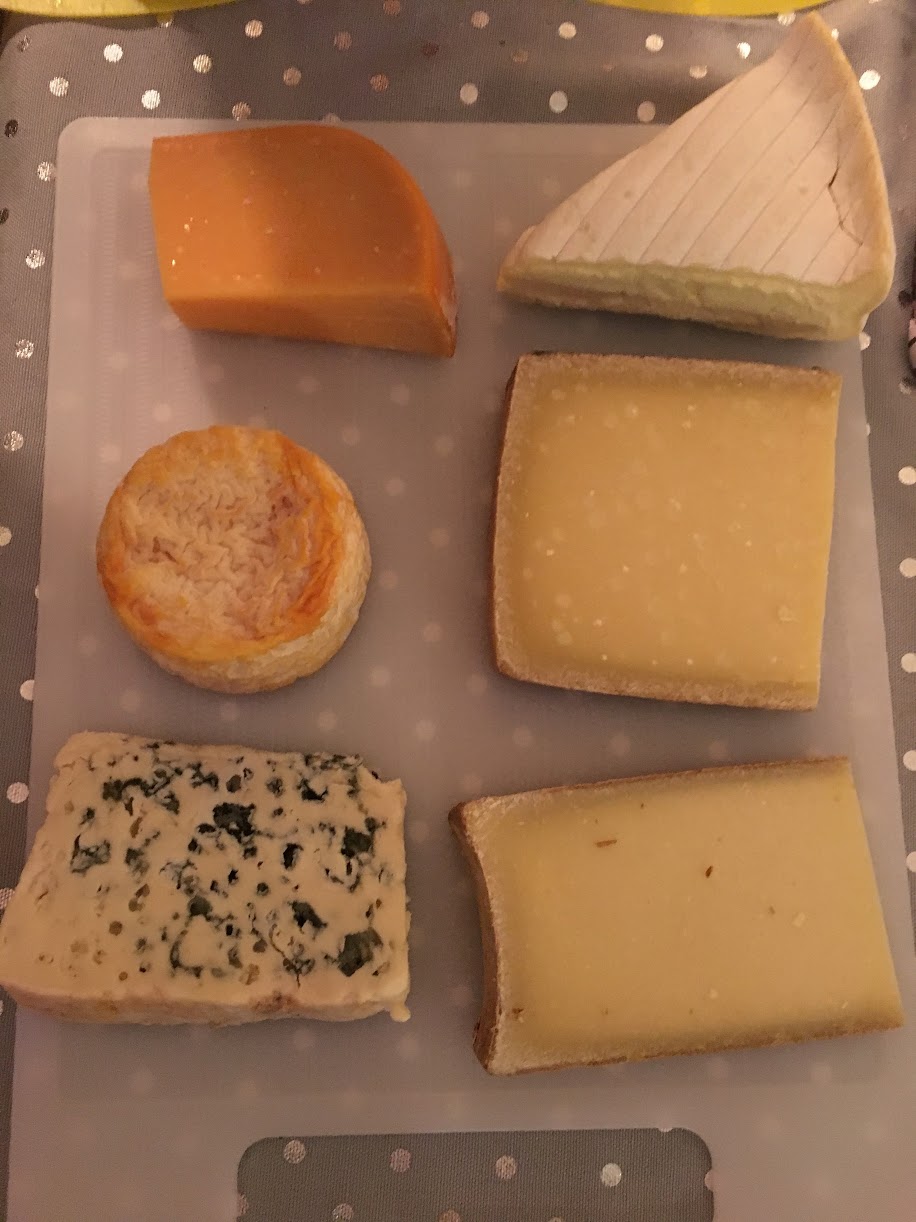 These are our gifts. One Muji shirt each and some assorted stocking stuffers. Like pocket notebooks and hair elastics. Nothing fancy. You know me. The real haul comes from the after-Christmas sales.

In the quiet week when everyone goes to their real home (no one’s from San Francisco, she says, except maybe her) we went to watch Call me by your name.

Um. Stunning. Left me speechless and still feeling it a week later. If you see one movie this year, let it be this one. It’s the best of both worlds between French and American film. It’s an ideal enough setting with interesting people (and, an actual plot) that it could be an American film. But it’s also realistic enough, thoughtful enough, emotional enough that it could be French. No, I take it back. It can’t be French. It doesn’t end at a random point in the story. Let’s just say that now I know what most French films are aiming for. I don’t think anyone ever said the word “gay” during the movie*. Not once. Sexuality should be on a case by case basis, shouldn’t it? Aren’t we all asexual when it comes to some 70%+ of the population?

*edit: not true. There was one conversation about gay dinner guests where the son, Elio was making fun of them and the dad demanded to know why he was acting that way: “Is it because they’re gay? Or because they’re ridiculous?”

I had a long debate with myself about whether it would be worthwhile to eat at a Michelin starred restaurant. For me, it was always going to be about the food and nothing else, as long as the “else” wasn’t so atrocious as to be a distraction (think of the decor or service at the average authentic Chinese restaurant run by average authentic Chinese people). In the end I let it boil down to a simple test which you can try at home. Blindfolded, can you tell what color gummy bear you’re eating? If not, the experience probably won’t be worthwhile for you because your palate can’t tell anyway. If you’d be just as happy at KFC, why bother paying extra?

Here are some pictures from my experience at La Maison des Cariatides. It’s housed in what looks to be a centuries old building with statues at the second floor and carved bust detailing in the window arches.

This appetizer was not on the menu. Deep fried cheese with a sweet and sour sauce.

The 4 unopened eggs were not for eating. N asked. This one tasted like a creamy bacon mousse.

The sauce on this scallop was made from roasted hay. It enhanced the flavor of the scallop without overpowering.

Neither of us knew beforehand what “Ris de veau” was. The texture reminded me of brain, but it turns out to be glands. I don’t think I’ve had glands before. It seems the grilled part extends deeper than just the surface, and of course, the grilled part is my favorite part.

This might not look like much, and it might not be fancy, but these are the best creamy, cheesy mashed potatoes I have had in my life. They’re probably 50% butter by volume.

See this nice waitress offering us a cheese course? I had some of every cheese. If you do that in France they consider you a glutton. Whatever. Worth it.

The first time I recall enjoying anise flavor. The dust is an anise powder on a white chocolate wafer. Which the grapefruit sorbet wore like a little hat. The refreshing fantasy of every summertime beachgoer.

The presentation on second dessert seemed haphazard to me, but I was just so pleased no one was trying to get me to eat flowers or foam that I didn’t mind so much. The cigar looking bit had this smoked flavor.

This wasn’t on the menu either: a bonus 3rd dessert of Paris-Brest.

Overall, an amazing first experience at a Michelin starred restaurant. I thought it would be more formal and stuffy than it was. I didn’t notice anyone wearing anything dressy. The atmosphere was upscale but comfortable. Perhaps because this was in France, not the U.S. — but other patrons seemed to be there just as a regular meal: not a special celebration or event. I’m told that it’s not nearly as common for the average French person to indulge in a sit-down restaurant meal as it is here: that if they do, it’s going to be seriously about the food and not about getting full fast. So in that vein, that probably means there are not as many “mid-range” restaurants between quick kabob type places and places like this.

I loved that there was serious care and consideration put into every dish, but no push to challenge or over-decorate. The dishes were whimsical, but no one expected me to eat ants from a skull.

Would I do it again? Sure, in a heartbeat. This experience has also inspired me to avoid mediocre dining experiences, if only to save up for places like this instead. 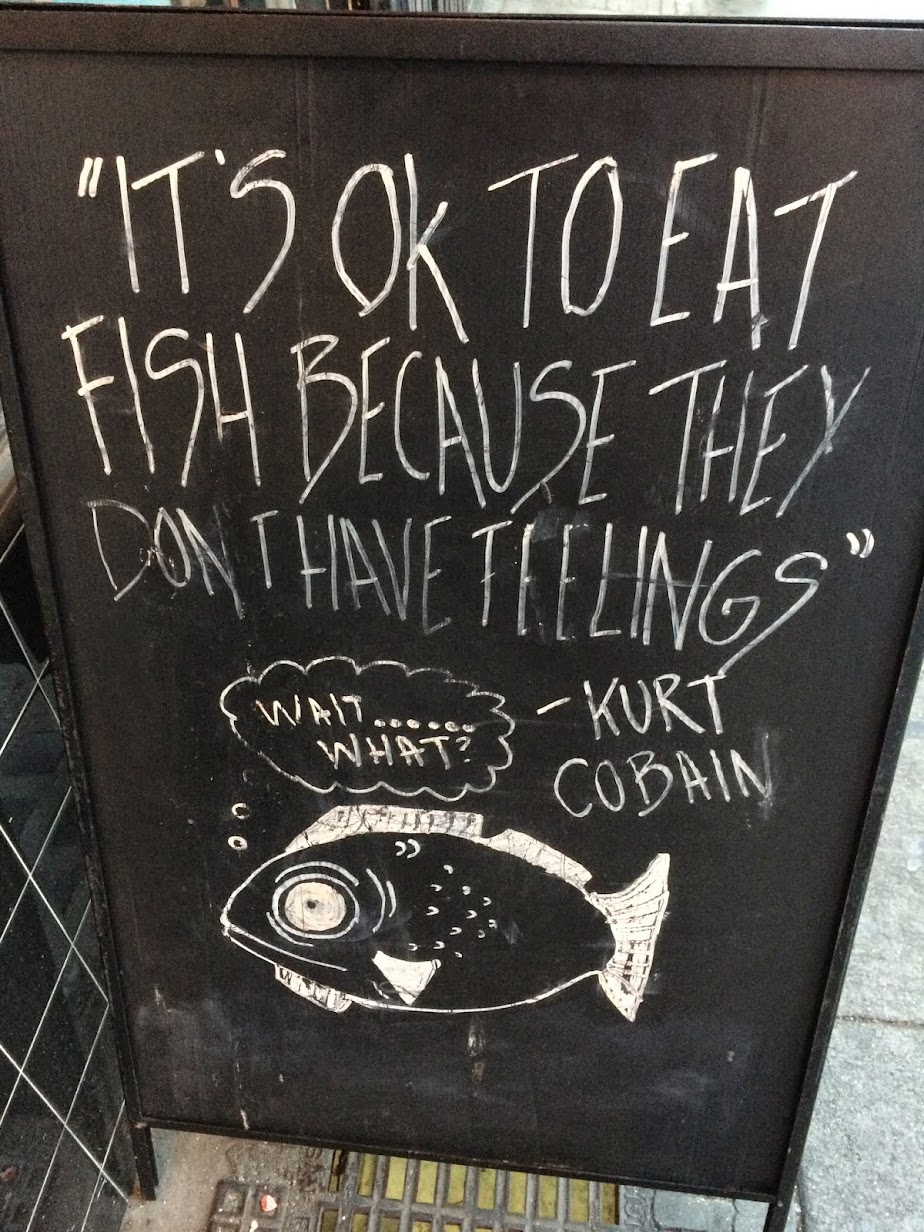 (Photo taken elsewhere… in the Mission)

A place that’s only open from 10am-2pm W-F has to be special. Elephant Sushi is tiny and easy to pass on the street. Though it’s in the iffy part between the Tenderloin and Civic Center, it feels far from that inside. Almost across the Pacific far. Inside, it’s calm and the staff is friendly — cheerfully answering questions about what to order. For me, the choice was obvious. The spicy trio: 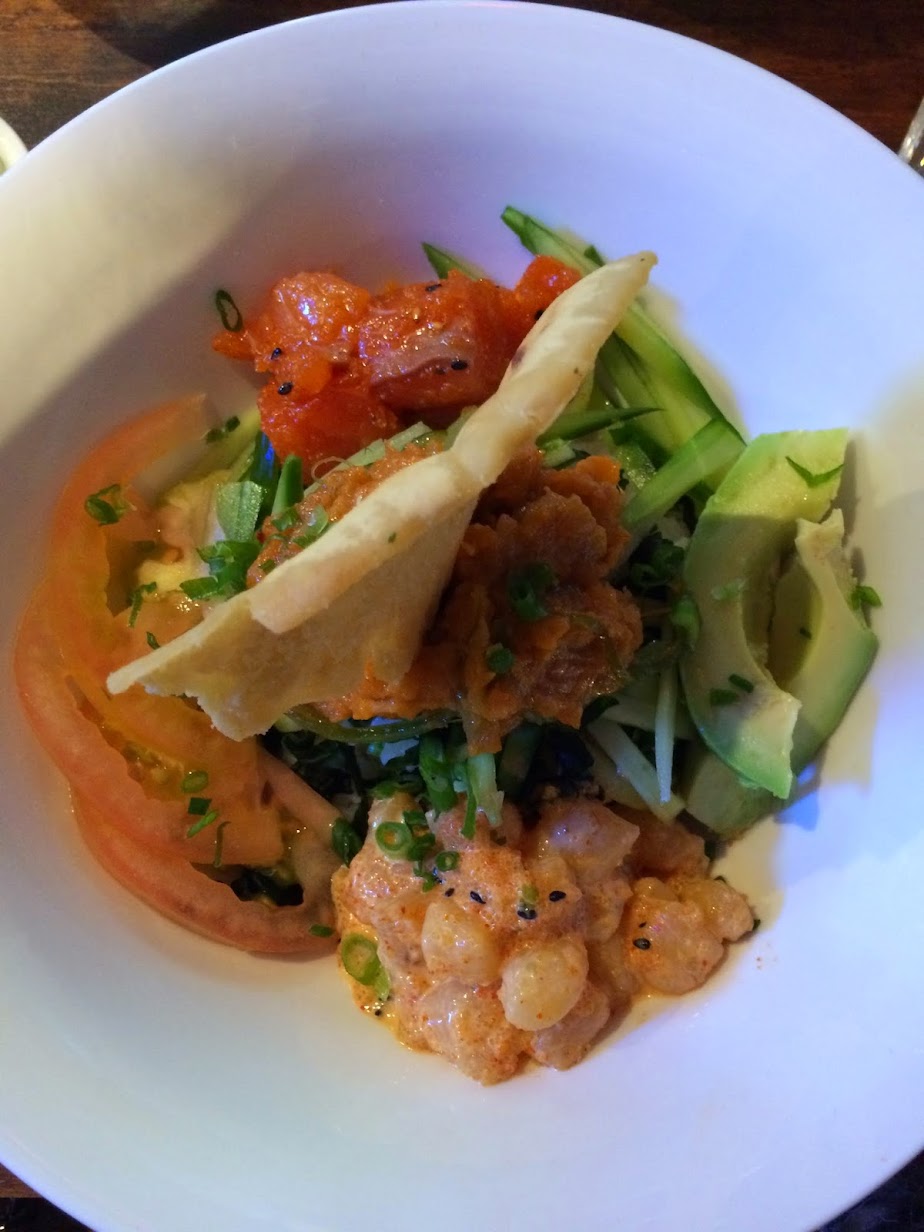 I had been eating de-frosted cod for the week prior to this experience, so the buttery texture of the spicy scallop was heaven — melt-in-your-mouth goodness. Everything in the trio (salmon, scallop, and tuna) was very fresh. Hiding under the fish is just enough rice to be filling, but not enough to bring on food coma. 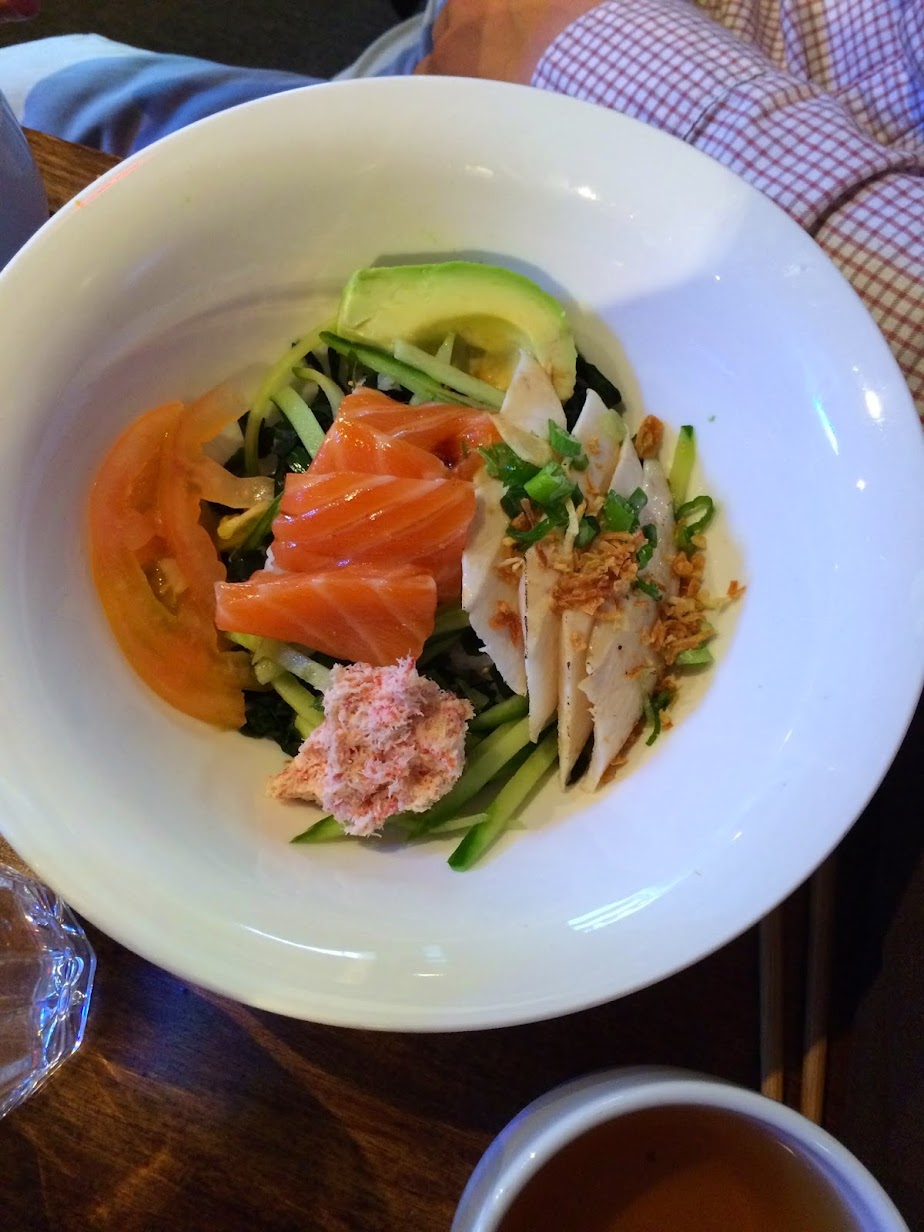 Compared with my bowl, I found his a bit dull. The butter fish doesn’t have much flavor, nor does the snow crab. Perhaps I should’ve added soy sauce and/or wasabi. They also make their own pickled ginger in-house: it tasted closer to ginger and was thicker than the rose pink ribbons of it that are standard elsewhere. 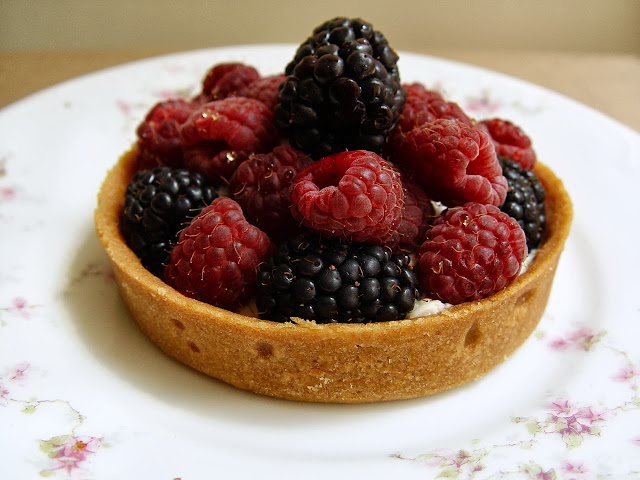 I have nothing useful to say about this. You can tell I have feelings for this subject though, since I have never captured anything else so beautifully on camera.

It’s a berry tart from Tartine, and it’s heaven.

I’m not telling where this is from. I wouldn’t want you to come and make the line longer for me. San Francisco looks like a sleepy seaside town in many parts. It’s easy to forget how big it is. The light. What one pays for when dining here is the light at golden hour. The way it softens reality towards the ideal. But it isn’t bright or garish. It’s a grey-blue dying haze. If fog could be illuminated… It makes all the simple things beautiful: white lion head soup tureens, tubby bumblebee striped salt and pepper shakers, the veteran aluminum pitcher and all its icy condensation. Everything is crisp.

Sometimes I see something beautiful, like Not Martha’s rainbow Leprechaun Trap Cake, and I think to myself… “I’m reasonably intelligent. I can read. I can follow instructions, kinda. I can make one too!” Then I wind up with a disaster like the one you see above. Poor thing.

It was off to a decent start, its bright concentric cake mix rings looked textbook.

But my visions of covering it with a light layer of white lemon frosting then decorating with tiny spring florals just weren’t meant to be. Attempting to spread the frosting took out whole chunks of cake like this one.

Not even the insides looked right. Instead of a perfect rainbow, I got clown vomit which varied from slice to slice. This first slice looked like it had a heart.

Another slice looked more or less like a rainbow, but the colors are mysteriously inverted. I wonder what that purple blob is doing. Perhaps that’s the magic smoke this cake released on its death throes.

But here! Ah, here is one tiny corner that looks as intended. The smallest of triumphs. I’ll take it.

I’m fascinated by the rich inner life of cake mix as it solidifies in the oven. I really did put the same amounts of colored cake mix down in the same order and my results are nowhere close. But I’m not sad. It just means I’ll have to try again.