This is my most recent. Everyone who knows me knows I’m a huge anglophile. Sadly, the paper isn’t great and the fancy B bled a bit. The quality of my engrosser’s script decreases wildly when I have to write on unlined paper without a proper model to look at. And both lion and unicorn look a bit girlie (not to mention the lion’s fancy red toenails). Alas. At least the sunset is properly dramatic. 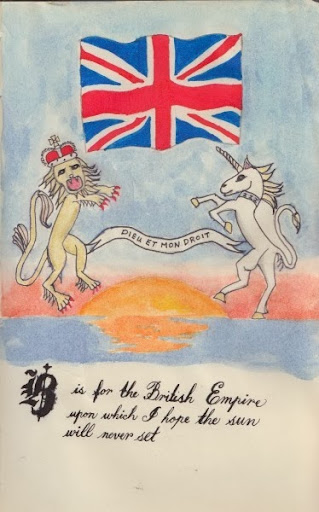 Please see here for other entries in this series and/or an explanation.

Is there a single thing I can say to you that hasn’t been said before?

Weren’t you recently a dragon? Sounds like we were meant to be.

So come to me and let’s fly, let’s fly away.

(Disclaimer: This is part of the letter series)

This is a secondhand story about an Englishman I wish I could meet. I don’t remember his name, so we’ll just call him Harry.

One night, my friend Haviland (who told me these stories about Harry) was at an ambassador’s ball when a strange looking woman showed up. She was dressed impeccably, from jewels and fur to heels, but there was something slightly off about her makeup. Haviland didn’t recognize her at first, but once she spoke, he realised that she was actually Harry. He wasn’t a cross-dresser or a transvestite or gay or crazy. He just thought it would be more amusing that way. All of his friends played along and it made the entire evening more entertaining for everyone who knew Harry’s secret.

Do not let the desperate pleas of this (ex-)colony go unheeded! I know that we had a bit of a spat in the 18th century, and I deeply regret those circumstances. However, I am happy to put that all behind us if you’ll only just consider taking us back. We will be the best colony ever, I promise. We will pay taxes, we will drink tea, we will spell things like colour and honour and realise correctly, and no, by no means will we ever, ever pull a stunt like the one in Boston again. Never ever. I promise.

You were right that we did not deserve to be represented in government. We still don’t, if the current state of our government is any indication. Elected officials who don’t believe in evolution and climate. A congress that can’t agree on a budget. Health care that leads in costs but lags in results. Laxity with guns that’s resulted in more deaths than all of our wars combined. Indeed, I am fully admitting our stupidity. We are helpless, but we could help make the British Empire quite large once again! Guide us, please.

(Disclaimer: This is part of the letter series)

A/N: This drabble was inspired by Handel’s gorgeous aria, Ombra Mai Fu. It is meant to convey a feeling that we all get one day, when we’re grown up but wish that we weren’t.

He needed this. It felt as if the entire world and its expecations were crushing in on him at once. Oxford was his childhood home, but he hadn’t been back in years. As he wandered the wooded paths on the outskirts of town, he waited for the familiarity to comfort him.

He had grown up here, played in these woods as a child. Made friends of wayward cows from nearby farms. Pretended to be a knight, and then a dragon, then a knight again. All of that was gone from him now. On and on he walked, through raspberry fields, along the murmuring Thames, willing that same peace to return. Those golden days he spent as a child, letting the long summer days and his imagination lead him. His heart desperately wished to return to that simplicity, and if there were anywhere he could achieve it, it was in these woods.

The sun began to set and he realised that though the surroundings had barely changed, he had. The pleasures of an endless, empty day for him to fill with adventures was no longer within reach. His sense of wonder had faded to grey, and he was just tired. Tired of responsibility, tired of keeping up an image. Tired of the can’ts and shouldn’ts and ought to’s. But there was nothing to be done but return to his regular life, aching with the memory of the idyllic childhood dreamland he could no longer seem to find his way back to.

I want to be friends with him again, but his name is too common, so I have had a hard time finding him. Given up, really. He’s still a story though.

1. I asked him once what his middle name was, and it was something very unusual that I never learned how to spell. Like “Sendragon.” I asked whether he had been teased about it in school and he said “yes, frequently.” “But you still told people your real middle name when they asked? That’s sweet.” I think he was annoyed with me when he responded, “it isn’t sweet, it’s honest.”

2. On his wall in his dorm room, he had a picture of himself dressed up as a ballerina. For a play. Probably because he went to an all boys school like Eton or Harrow.

3. I once played a prank on him. I called him and had a British robot leave a message saying something very ridiculous like “Oh William, sweet William, how I love you. I can’t wait to see you later. Kisses, darling. Mmmm.” I didn’t test it beforehand and the “Mmmm” was a jarring and scary EM-EM-EM-EM, rather than a soft moan. I don’t think he suspected me, but he did tell me he was getting strange calls, “probably from sorority girls.”

4. His parents came all the way from England to take him to dinner on his 21st birthday. When I saw him afterwards, he had a golden signet ring with his family crest on his pinkie finger. I didn’t make the mistake, that time, of saying it was sweet. He wore it, always.

5. He was kind and intelligent, ever a joy to talk to. But when I used words like “sweet” or “cute” to describe him he’d get upset with me and pout. “Those are words you use to describe a puppy or someone’s 5-year-old brother, you know…”

Well, if you know William S. Harvey, let him know he has an old friend who still thinks fondly of him.

If you ever doubted how sentimental I am, you can put that to rest today. This will be the first of several posts about the things I am saddest about not having any more.

The summer I spent at Oxford, I lived in the dorms at Pembroke College. We were served breakfast and dinner at the dining hall. Though it was buffet style, there were people lined up on the other side of the food trays, filling our plates as we pointed and nodded. One of the workers was a girl who was probably about my age and just fairy-tale beautiful. Her hair was pure gold and her eyes were some improbable shade of bright blue-green. We became friends. Really! I even have a photo of the two of us together in the quad. She was a raver and I was a raver, so at the end of the summer she gave me a raver bracelet. Every bead was a different day-bright color. I cherished it.

Then I lost it. I don’t think it even made it back to the US with me. I still have her name and contact information somewhere. I’m sure she wouldn’t even remember me, much less the silly bracelet. But this is still one of my saddest lost things. When I die, I’ll know I’m in heaven if I’m reunited with them all. A little box marked “dolly’s lost things”  will be waiting for me.

Most of our childhood is stored not in photos, but in certain biscuits, lights of day, smells, textures of carpet…

Because I’m a glutton, of course one of mine would be raspberry ice cream. Sounds strange, I know. I’ve looked for it in grocery stores here, but they only have that “sorbet” that turns into a sticky pond of high fructose corn syrup at the bottom of my bowl. Besides, its flavor isn’t compatible with sugar cones, which I adore.

I only had it once. I was 15, spending the summer at Oxford studying drama and psychology. I wouldn’t even know how to find my way back there. I followed someone else, seemingly through the woods. I think we passed a cow on the way — a shy one who didn’t want to be pet. It was a strawberry farm with palm-sized strawberries sweeter than I thought possible. They were selling home made ice cream. Since I’d had strawberry before, I tried the raspberry. I’ve never forgotten it. All those perfect days spent inappropriately lazing on lawns, tripping on cobblestones, being spoken to in British. I’m sure it’ll all flood back with just one taste.

years ago, i had this idea that i would like to marry the duke of devonshire because i liked the idea of being called “dolly, duchess of devonshire”.

that must have been nearly 10 years ago. the duke is also some 20 years older than me. sadly, i’ve discovered (by visiting his wikipedia page) that he’s married now. his little heir is not yet two years old. i’m afraid i’m not that much of a cradle robber. there goes my only life goal!

but perhaps i can still be successful. i define success as “being paid to kiss Alexander Skarsgård.” there are only a few people who are or ever can be truly successful.

Posted on June 26, 2012 by defiantdolly 0
Defiant Dolly
Blog at WordPress.com.