We almost didn’t make it to the Feast of Saint Efisio. But while we were in Sardinia, one ferry line actually failed, so we had to stay an extra day. That extra day was St. Efisio’s day. Now, I know this might not seem like any kind of a big deal to someone who grew up celebrating Catholic saint days in a big way, but to me, this was completely extraordinary.

To begin with, people from all over Sardinia come to Cagliari and march through the streets in traditional dress.

Some carry flags, some carried banners with the name of their town 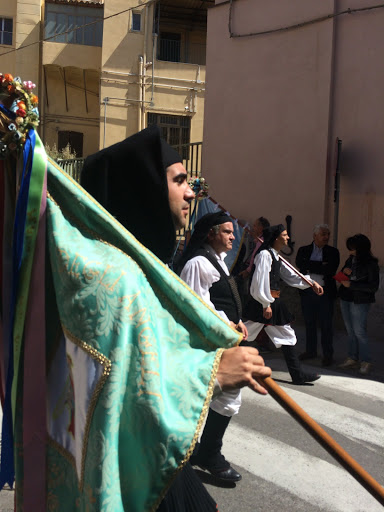 Some had flowered and ribboned flags

And all the outfits were distinct and interesting

Some were a little nun-like

There were even a few little ones 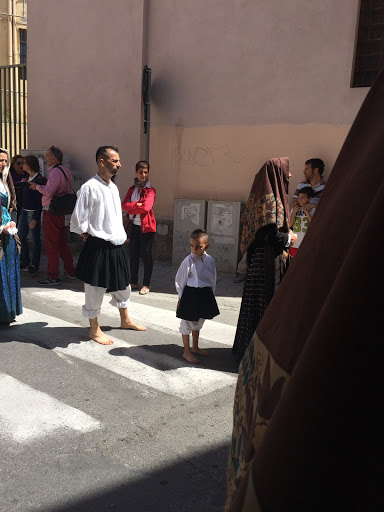 Then there were parades of horses. They weren’t show ponies though. Some were badly behaved — crashing into each other or wandering off. At the end of the parade, they tossed baskets of rose petals so thick you could barely see the ground. Crowds were gathered as if for a huge celebrity. 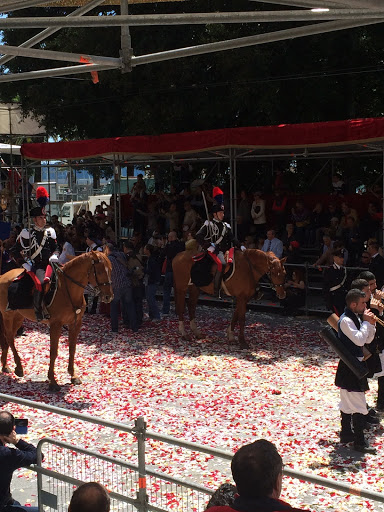 There he is! St. Efisio!

Okay, I didn’t get the best picture hanging on to the back of a scaffolding. I tried. I think he starts out at the church he lives in, gets dressed in his ceremonial garb, participates in this parade around town, then goes to a different church to change into traveling clothes before continuing on along the coast for a week or so. There was a moment when one of his guards opened the carriage and let an old woman touch his robes. She was more moved than I think I have ever been.

Religion is an interesting thing. I’m glad to have witnessed this feast day, even if I don’t understand it. I could see how much it meant to others. This horse seems pleased with the day.