There is a law on MUNI busses. I think it’s a California law. That certain seats at the front of the bus have to be surrendered to the elderly or people with disabilities. I don’t think there should be designated seats or a law.

People should just be considerate of others without legislation. The other side of it is that people who have taken seats that aren’t designated as special feel like they should be able to just ignore the people who are standing, no matter how much they need to sit down. It’s an abdication of any consideration towards one another.

One day I had a seat on the bus during rush hour. A man got on with a large, heavy box. He had a hard time balancing it in one hand and trying to hold onto the railing with another, so I offered him my seat. He was grateful and relieved, but asked me if I was sure. Of course I was. Here’s the strange part. He must have found my act so unusual that he felt the need to somehow repay me for it. He dug in his box and handed me this sand dollar: 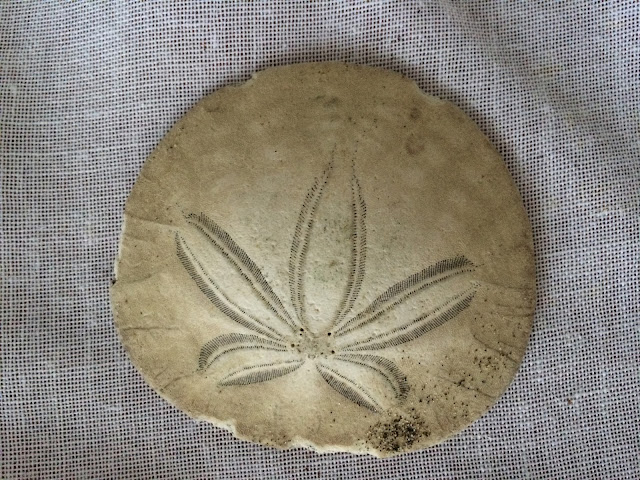 I thanked him for it. I don’t think I’ve ever found a whole one. “Where did you .. is the whole box full of them?” I asked. “Yeah! They were all over Baker Beach… and another beach further south of here.”

Instead of the law we have, why not encourage people to just use their judgement? The man with the sand dollars wasn’t elderly or disabled, but he was clearly having a harder time than most of the people with seats. It’s sad that it wouldn’t even occur to most people to get up for him. It’s sad that some elderly people who are able to stand just fine demand seats (sometimes from students with heavy backpacks) simply because they can. It’s sad that we need a law to tell us when someone might need our seat more than we do.