Nigel: What are you doing, little girl?

D: I’m making a list of reasons I like someone to see if they are valid reasons to feel the way I feel about them.

N: Oh! How droll. You seem to be having some difficulty though. Why?

D: Well, I don’t know what reasons are valid, and even if I did, I’m not sure what weight to give them.

N: That does seem like a problem. Maybe I can help. Just list anything that comes to mind and we’ll sort through it together.

D: Good idea. Nigel, you’re the best. Okay. I have a boy in mind. In no particular order, I like his eyes, his hair, his ribs, brushing him and the way he smells. He’s a pretty boy.

N: Darling, you can’t be serious. Those things are ephemeral. You can’t possibly base a meaningful relationship or friendship on those things.

D: But Nigel. What about living in the moment? I also hear that all of the time. Live in the moment, enjoy the moment. I can’t be thinking about when he loses his pretty eyes in an accident, and all his pretty hair to baldness or disease. I can’t worry about whether he’ll become so obese I never see his ribs again. Right? Enjoy what exists for just right now?

N: Dolly — those words don’t mean what you’re playing at. You know better. They mean that you shouldn’t fret about losing what you have, the way that your favorite sonnet does. But nothing you listed there has any predictive power about anything else. Don’t you like anything about him that gives you insight about who he is?

N: But you are trying to inform your feelings for him, right? Attempting to correct the magnitude of your feelings to factual observations and using unassailable logic? In that case, it rather begs the question to mention how you feel. All of these are about your own feelings. Try for facts, but deeper ones than the first ones you gave.

D: I don’t know very much more about him. He purrs continually when I sit near him.

D: Yes! Here’s a picture. Every time I see him I want to take him home with me he’s such a darling old gentleman. Just the best lap cat I’ve ever met. I mean, there isn’t much more I can know about him, right? Isn’t it enough that I just like him? 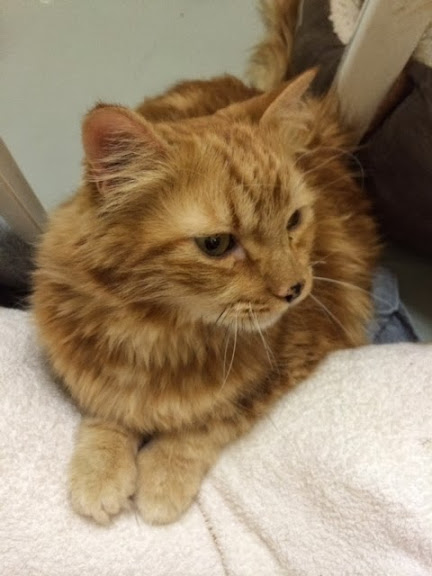 Why did I ever think you could be serious. Even for a moment. I think I need tea…

This thought experiment has been cute, but I would question the need for such a system. Surely its use would not be to try to convince yourself of someone’s worth once you already felt they were a waste of your time? If you had the most robust list of valid attributes, an impeccable metric, and the coolness of mind to apply it, would you use it in this way? Would you force yourself to admit you had unfairly dismissed someone as someone you couldn’t date or be friends with?

D: No, I don’t think that’s an intended purpose of this system.

N: Right. So it is only to force yourself in the other direction: to reign in strong feelings that you determine, by these measurements, that you have no right to have.

N: That would imply that there is no use for feelings at all. Nothing that can’t be accounted for cleanly by looking at the facts and pushing all of them through to their logical conclusions. But then you have that! What happens if two people look the exact-same on paper, but yet you feel differently about them? Is that extra information invalid — and you have to ignore it? Because there is a world of information that comes in with no conscious effort. Information we have no ability to explain, information we aren’t conscious of, but nonetheless have bearing in some way. For example, we are more attracted to people with complementary immune systems and we can “tell” this by their pheromones — we think they smell good.

D: Don’t be tiresome, Nigel. I know about pheromones. But those are for the purpose of reproduction, right? What if your focus is on long term compatibility? Don’t you have to ignore factors like that and the initial rush of dopamine and other happy neurotransmitters?

N: The answer isn’t to ignore any of it. Or to peg feelings to the set of conscious information. But maybe, realising that there is so much that you aren’t aware of, credit the non-conscious information for what you may think is an irrationally strong feeling. Have you figured out the motivation for using such a system? Rationalizing feelings out of existence?

D: I’m not sure. But perhaps it’s to never have to look back and say, “I was possessed to say that. Now I have to explain why it’s no longer true.”

N: Oh, for heaven’s sake. Dispense with list-making. Dispense with quality-measuring. Leave the metrics to the mathematicians. All that you need is to keep that nonsense to yourself. If you need to declare anything, declare it to me, little girl. I’ll write it down for you and we can throw it in the fire and watch it dance.

D: Sounds like a plan! What if it’s something that I ought to say? Something that someone needs to hear from me?

N: Nonsense. What’s meant to be will be. A person who belongs with you will never need to hear you say a single damned thing. He or she will read it in your eyes, your touch, and in the nuances between your words. Don’t forget your motto. We finally found one that fit. Let’s say it together and get on with our day, shall we?

In every way implied but never stated.