Tours has a funny logo, which is a tower with a rainbow. I think it was rendered in 8-bit too. Unfortunately, I didn’t get a picture. As a consolation, here’s the cathedral.

There was a godawful gold fountain donated by the United States, of a naked Native American with a bald eagle. How embarrassing.

Here is a decent French fountain. Much lovelier.

Along the river, colorful flags.

There was even a ferris wheel. I’m told it’s pretty new.

Amboise. I fell in love the minute I saw the sun over the river. We were there at sunset, and it was just an afterthought, but I want to return one day and stay longer.

We climbed up the hillside to find a panoramic view 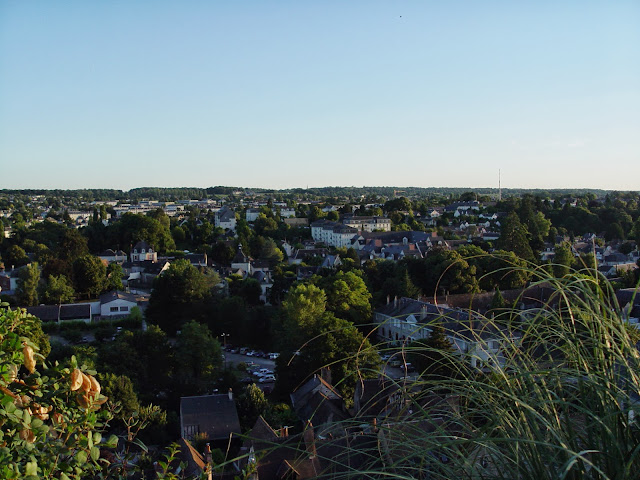 We met a friendly ginger cat. He was a purr machine and adopted us right away.

We heard jingling coming from the yard our ginger cat was lying in front of. I thought the proprietors were coming to investigate us. N said “It’s a horse!” I didn’t believe him. “Oh yeah, sure it’s a horse. In someone’s backyard.”

But he was right. There was a castle, a market, and stands selling slushes and moules frites which we didn’t have time to explore. We could’ve had that for dinner, I’m told, if I hadn’t demanded we get a frozen pizza rather than a jar of pickled vegetables. Which is true, but then I would’ve had to eat half a jar of pickled vegetables for dinner some other night. >.<

Look how gently the sun sets.